About The Cassandra 23 LARP

Back in  2000 Christian Jensen Romer & Polly Draper created a 7 part campaign which ran over one year, using a modified version of the Cthulhu Live rules but with little in common with how most Cthulhu Live games were run at that time.

The game featured a fictional UK government section of an intelligence agency called Cassandra 23 – it was of course inspired by The X Files  and later Delta Green by Pagan Publishing which I read during the course of the campaign.  Now of course one would point to Charles Stross’ Laundry series – however they were not written back then, and amusingly the C23 campaign as it was usually abbreviated pre-empted Stross in a few black humour elements, most notably Agent Rurik’s paper clip audits.

The original campaign ran with each separate scenario taking 12 to 48 hours and being run in a pervasive manner. The game was set in the contemporary here and now, using Cheltenham as a backdrop. It was nothing like most larps of the time, because we knew no better – rather than pursuing the classic unity of time & place, and keeping the characters together and in one small environment, we ranged all over county, split the party – indeed encouraged them to split up to get everything done in time – and blurred reality and game as far as we could.

Each episode was about a specific literary or cinematic genre; the unity of the campaign survived this shift in emphasis from adventure to adventure. The pacing, conventions, mood and delivery of the games varied by genre – and in a revolt against the stylistic conventions of the 1990’s the final scenario was actually not as every player expected utterly DARK with more DARKNESS than you could shake a DARK THING at — it was in fact the most upbeat and joyous, if rather apocalyptic, of all seven, drawing inspiration from the film Ghostbusters!

The games were well documented in photographs, websites, player accounts (IC) and the original scripts. I plan to make those resources available here for those with an interest in the History of LARP. 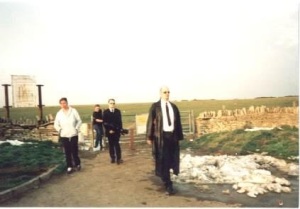 Primarily however this site exists to support the new “reboot” – a concept I don’t think even existed back then – of the LARP in 2015. You will find information on rules, background, events and everything you could possibly need on this site.

One thought on “About The Cassandra 23 LARP”